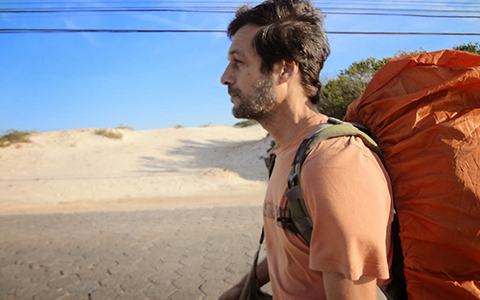 Eduardo Marinho was born in Espírito Santo in 1960. During his adolescence, he began a military career and later entered a law course, which he left at the age of 19 to seek other paths. Currently, he lives in Niterói and usually exhibits his work on weekends at Largo dos Guimarães in the neighborhood of Santa Teresa, Rio de Janeiro, and since 2010 he has been invited occasionally to give lectures. Through the internet, he exposes his experiences, works and ideas in the Observar e Absorver blog. With his drawings and words (there are several videos of the artist on YouTube), he has been proposing reflections, questions, and promoting ideas in favor of a more solidary society for decades. “The Military Dictatorship was the military face of the business dictatorship, which was threatened by the changes that were being made during the Jango period, with the union and popular movements. Society has not yet overcome this structure that serves a few with excesses and sacrifices the vast majority, subordinated, controlled, exploited, sabotaged and excluded from the benefits of technology, even from the fruits of their own work. (…) Art is a very broad word, it involves many types, countless. For some it is a level above sensitivity, something for higher beings. For me, it is a quarry, a job like any other, the same size, with the responsibility of touching or "dialoguing" with the soul of the human being ", he says.

Eduardo, what was the main “start” that made you leave the guaranteed part of society as you like to qualify?

There was no click, a moment of “enlightenment” or something like that. There was a moment of rupture, more on the part of family and friends than on my part. I I just assumed the change that I found inevitable, after trying to fit in several ways. It was a turbulence in a path that was already being followed internally and externally, in the experiences lived then. At that moment, the whole scenario changed permanently, the experiences and the coexistence, the social environment, all the changes were radical - despite the procedures having been tried several times, on holidays, on holidays, traveling by car, sleeping anywhere, living with “professional” foreigners. It became definitive with the general cut of relations with the medium of origin. General and total. And life took on a sense of real learning, not the preparation for an enjoyment that did not attract me due to the internal price it charged.

You always say that society is unfair, wicked, cowardly and suicidal. But how to change the vision of a society, which even acting unconsciously, acts in a certain way in one of these four pillars?

I make my vision of the world as I go on living, observing events, experiencing, looking for learning opportunities, trying to build my own values and deconstruct the values planted in my unconscious. This determines my behavior and my work, where I expose that view - subject to change, of course. And what I perceive is that, when working internally, external work is done consequently and with better discernment, more security in the choices and ability to infect, to offer opportunities for reflection.

How do you see capitalism?

As a corporate dictatorship, as there was a monarchic dictatorship. The Military Dictatorship was the military face of the business dictatorship, which was threatened by the changes that were being made in the Jango period, with the union and popular movements. Society has not yet overcome this structure that serves a few with excesses and sacrifices the vast majority, subordinated, controlled, exploited, sabotaged and excluded from the benefits of technology, even from the fruits of their own work. In fact, business dictatorship finds much more receptivity in people's ears than capitalism, which has already been overworked by the massacre of advertising-propagandistic-media that uses, among so many resources, the psychology of the unconscious. The rejection is clear.

Should art have a social role?

Mine must. Art it is a tool, but more than an end in itself. I do not aim for technical perfection, I just want to say what I think and how I see the world, with the intention of provoking questions, causing reflections, denouncing fabricated lies that make the community's life hell. It is a necessity, a kind of compulsion - I am and I like to be unhappy with the form of society in which we live. I don't want to condemn those who dedicate themselves to decorative art, or those who improvise anything with an aesthetic sense, sometimes even that. Each has his own conscience and the obligation to make his choices based on himself. A choice is like planting, it will yield your harvest. I make my choices, but I don't want them to be right for others.

Art is a very broad word, it involves many types, countless. For some it is a level above sensitivity, something for higher beings. For me, it is a quarry, a job like any other, the same size, with the responsibility of touching or "dialoguing" with the human soul, its abstract body, feeling, thought, worldview. Whether it plays well or plays badly, that's another thing. It depends on the artist, the character, the intention, the worldview, the thoughts, the sensations, so many things can be ... or none. What is certain is that it can be a valuable tool for raising awareness, raising awareness, clarifying, in short, a factor of personal and social change. That's where I go.

What is your view of the media in general?

In general, what you see is a scoundrel media, a traitor to the population, which works to distort reality, create false values, stimulate competitiveness and the - compulsive - consumption and ostentatious desires. The commercial, private, giant media is a power over the so-called public power, a power over the general mentality, in maintaining the social structure. At the service of business interests, at the cost of much human suffering. It closes with economic powers, with the financial market, with the enemies of the people and their exploiters. Historians of the future will have chills when they study the role of media current within the human community.

You say that the people do not need leadership, they need conscience. In your view, what should be done to create this awareness?

Consciousness is constantly changing, no one has the power to create consciousness, but to develop itself. I believe that one can only become aware if one becomes aware, without falling into the illusion of “I am already aware”, a danger and a sterilizer for this work. That needs serenity, depth, sincerity and humility to be done.

What do you think about the Brazilian left, which in many cases also benefits to some extent from the benefits of capital?

You can't talk about the Brazilian left as if it were a homogeneous bloc. There are countless ways to left, worldview, choices and behavior, proposals and ideologies. It is very varied. The enjoying part is that it is carried out in the puppet theater of the royal power.

Does the craving of consumption for the pursuit of happiness bother you?

It doesn't bother me because I don't have it. But I don’t go into a “chópim center” to avoid seeing the sick looks of consumer desires, the advertising liar - everyone loves me and only thinks about my well-being, seductive smiles and promises of happiness, unless I go to the health department. complaints to return a product. As for being happy, how could I, knowing so much suffering, so much injustice around me? I can be good-natured, serene, in a good mood, but happy only if I am indifferent to the suffering of so many people because of the colossal injustices, selfishness and cruelty of a handful of multinational bankers and mega-entrepreneurs. I don't care about the “happiness” of ignorance, selfishness, indifference, for me this is not happiness, but a statement of mentality and feeling. What bothers me is the media and advertising massacre, anesthetizing consciences and producing alienation and consumption desires, false values and conflicts that strategically divide, alienate people and prevent solidarity, respect and unity.

The founder of the band Kiss, Gene Simons, said recently that the poor must be kind to the rich, after all they are the ones who give them jobs. Does this go against your thinking that they (rich) are weak, disguising their weakness in the amount of money they have?

The priests also promised a soul and a little place in heaven to docile, obedient and submissive slaves, enduring with resignation all the suffering imposed by their masters, to get a wanderer in the slave quarters of paradise. No comments.

Many capitalists say something very similar to what you say, that is, that there are many parasites in the state. When entrepreneurs say that, do you believe they are being cynical?

It is a generic, unfocused, dispersive statement. Want more parasites than banks? Or entrepreneurs who benefit from slave labor imposed on small outsourced workers at the price imposed by the entrepreneurs themselves? O state, kidnapped by economic powers, is like a Robin Hood in reverse, steals from the poor to give to the rich. And it is not enough with the tax money that falls mostly on the poorest in taxing consumption above anything else - income, wealth or fortunes, for example -, no, it also steals rights, lives, instruction, information, awareness.

The parasites of the State lend jets and mansions to their “politicians”, as a prize for their “good services”, plus the guarantee of campaign financing, countless supports. But, as always, they point to their victims as responsible, not only for their own disgrace, but also for the malfunctioning of the public apparatus - which needs to be privatized, in their opinion.

What is the role of love for the balance of our society?

Unrestricted love for the human being is the basis of the revolutionary course, in my view. But it is not easy to achieve this feeling, the rooting of competitiveness, of dispute, of selfishness, of mistrust, was done with extreme competence. But the fact that it is difficult does not make it unfeasible, on the contrary, it values it.

Eder Fonseca is the creator and executive director of Panorama Mercantil. With changes in the editorial focus over time, the portal gradually became a traditional vehicle for Brazilian Internet interviews, already being considered by some big names as an influential “circle of reflection”.